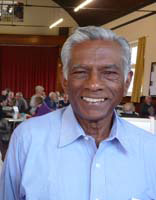 Theva is a Sri Lankan who worked as a teacher in Colombo, Sri Lanka and in Zambia, before moving to the UK in 1975. He is married with two children and three grandchildren.

In the UK he was employed in a travel  company.  In 1982 he set up his own company, Travelconsult initially to provide British Airways College of Marketing Customer Services training for travel agency full-time staff. Subsequently this developed into training in travel agency work for school leavers. Students followed a two-year programme that provided them with City & Guilds qualifications and other trade approved qualifications and enabled them, without exception, to achieve full-time employment. Two students were awarded Medals for Excellence by the City & Guilds. Travelconsult was awarded a certificate by the City & Guilds in recognition of its high standard of teaching and training and in 1989  was awarded a Certificate of Commendation for Effective Training by the Yorkshire and Humberside Regional Panel of the National Training Awards.

When the training programme ended in 2001, Theva worked as a qualified interpreter for the Home Office, Courts and Police stations and for local councils. Since his retirement he has worked as a volunteer with the local hospital and hospice.

Whilst living in Sri Lanka Theva was conscious of the disparity in education, health and housing between the tea plantation people and the rest of the community. Tea plantation workers were by far the poorest within the population, even though they contribute to nearly 70% of foreign earnings through their hard and devoted labour. When living in Sri Lanka he did not have the human or financial resources to help the plantation workers in a constructive way. Since his retirement he has felt able to take the initiative in establishing a charitable venture aimed at helping the children of plantation workers to improve their situation through educational attainment. With the help of generous donors from his church, Dignity Through Education was established in 2016. To date nineteen  students have been given additional financial assistance to help them to study at university level and progress to well-paid employment.